I get a lot of messages on social media that literally just say "hi".

This isn't a great conversation starter ❌

The person you are messaging has nothing to build on. 📉

There isn't much incentive for me to make the effort if you haven't. 🤷

Most people, including myself, are too busy to reply to a message like this ⏳

I don't have time to find out what you want so I will ignore your message. (Yes, even if you send more messages saying "Hi Pete !!!") ✋

Instead, ask the question you want to ask. 🗣

Be as specific as possible. 🎯

Don't ask if you can ask a question either 🤦♂️

Just say what is on your mind 😀

A good example of reaching out to someone

Instead of sending a "hi" message or asking "can I ask you a question?" here's a far better example:

I would always answer a message like that because it's specific and asking a good question.

Making your question one that is interesting and fun for the other person to reply to is under-rated.

A bad example of reaching out to someone

"Hey Pete, how do you start a business?"

This is really far too vague to answer.

Also, don't ask someone anything that you would find easily in a search engine in 5 seconds. That's just lazy.

You are competing for attention

Assuming the person you message gets lots of messages, you are competing against lots of other people for their attention. Do you really think I'm going to open and reply to your zero effort "Hi" message when there is another message asking me a specific question?

The same thing happens all the time on dating apps. Men send girls messages like "how's it going?" and expect a reply. You have to do a lot better than that considering the number of matches most women get compared to men. If a girl has hundreds of matches, why would she reply to someone saying something very ordinary and uninteresting?

Written language etiquette is different to in real person. It's totally normal to just say "hi" to a person if you run into someone in the street. Naturally, you start a conversation because you can see the other person and it's the done thing to do. It's not online.

Trust me when I say I wrote this to be helpful. I want your questions to be answered! I just know the reason you are being ignored is because you aren't making the effort. It may also be a cultural difference. I'm sure in some cultures, immediately asking what you want could be perceived as rude. For me at least, it's more rude to send a one word message to someone and expect a reply.

There are a million other things I could be doing instead of replying to your message. So don't take someone's attention for granted when you message them. Be specific, respect their time and get to the point quickly.

No CS Degree now has dark mode, looks great on mobile and shows you how far through an article you are. I used the Liebling theme from the Ghost marketplace. I had been meaning to change the theme for about 6 months. Frankly, it 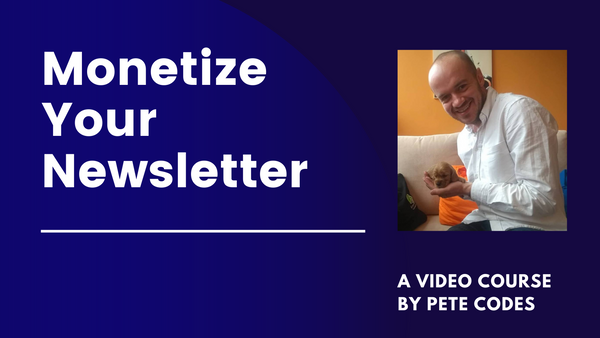 So I put my Monetize Your Newsletter video course on Product Hunt. This is my guide for avoiding the pain of running a newsletter and making money online instead. The