Daniel Vassallo is a former Software Engineer at AWS who quit his job last year in order to work on his products. Along the way he started to pick up a following on Twitter and made a video course on how to build an audience. I'm excited about chatting to him on Zoom today - you're welcome to ask him questions too! 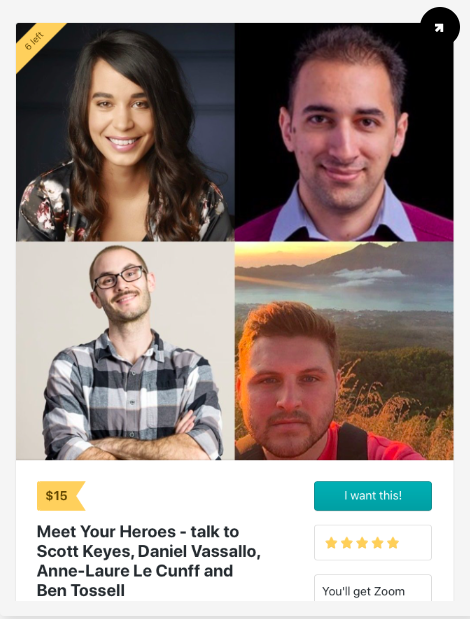 In a very short space of time he has earned over $200,000 from just this course. It's pretty incredible given this was just a product he made while he was working on his next big project, Userbase, which lets you make serverless web apps.

I don't think Daniel had any idea his course would blow up the way it did. He helped himself by writing a post about quiting his $500k job at Amazon. That definitely helped him get some initial followers.

Of course with an existing audience he was able to have a big advantage over other content producers. And as word spread of his course, he got more followers! And so his credentials improved meaning he sold more courses! Because if you see someone selling a course on getting more Twitter followers and they themselves have an audience which keeps growing, naturally you are attracted to their product. And so the cycle continues.

If you are interested in the specifics of the course, I wrote a review here.

Of course there are already lots of Twitter courses available online. So what made Daniel's course stand out?

Firstly, he used social proof and early buyers generated a lot of positive reviews. I should know as I bought a copy after seeing that Randall Kanna had seen her following shoot up after taking the course. Word spread quickly in tech circles that it was a quality course.

Secondly, he has been clever in using the Gumroad affiliates system. Gumroad is awesome as it has a really flexible affiliates feature open to anyone on the platform. You are able to set what % of a sale each affiliate is going to get. Of course, Daniel only has to pay when someone makes a sale. So with affiliates he has people like me speading the word about his courses and making money for him passively. It also helps that he gives 50% to affiliates which is a good incentive to share his course.

He also set a high price point which conveys value. It can be paradoxical but if people pay a high price it can be better as no-one wants to believe they paid too much. So they justify it to themselves. It's also more likely they will complete the course.

Like most people, I have a graveyard of free and very cheap courses in my Udemy course. I also have a tonne of free ebooks I've never read. In contrast, I just ordered Steph Smith's Doing Content Right ebook which cost me $30. As it cost me more I'm more motivated to read it as I want to get my money's worth. With free and very cheap books, I value them less.

Stella Artois was able to craft a better image in the UK in the 90s by a clever slogan - "reassuringly expensive". This is still one of my favourite marketing campaigns of all time! Instead of having people question the price you make the higher price a signal of quality.

I'm looking forward to chatting with Daniel today on Zoom at 10am Seattle time. For 30 minutes I'm going to be asking him questions and then I'm passing the mic, so to speak, to anyone who wants it! I've organised two chats like this already; one with Anne-Laure Le Cunff and last week I spoke to Ben Tossell.

I've reduced prices by 50% to $15. This gives you access to the Zoom call with Danial as well as next Monday's chat with Scott Keyes, the co-founder of Scott's Cheap Flights.