I decided to not set any goals this year. I'm creating systems instead.

I had a goal last year to get to $10k MRR. However, I didn't have a plan on how to get there. It's definitely important to have self-belief but that's clearly not enough on it's own. I missed my goal by miles (my best month was a bit over $3,000, helped a lot by Black Friday)

I started reading at the end of the year about the whole systems vs goals debate. Let me explain.

Why most people set goals

Set an ambitious goal, tell people and you probably feel pretty great. The problem is you still haven't done anything.

Research from NYU backs this up - don't share your goals publicly:

"The researchers concluded that telling people what you want to achieve creates a premature sense of completeness. While you feel a sense of pride in letting people know what you intend to do, that pride doesn't motivate you and can in fact hurt you later on.

I would go further and say you shouldn't set goals at all. I felt great for ages because I had a goal of making $10k MRR is a lot of money (to most people!). But you can't kid yourself forever - eventually you have to put the work in. This is where systems shine!

Why systems are better than goals

It's no good having a goal of $10k MRR if you aren't repeatedly doing things to get you there.

So my new approach is to have a system. I have systemized my goals.

Do you think that someone that codes every day is going to get better? Probably.

Do you think someone that talks to customers every day will fail as an entrepreneur? I think it's unlikely.

Will someone who reads each evening read a lot of books? I reckon so.

None of these habits require goals. I think picking up and sticking with a habit will produce more benefit in the long run.

People often give up after completing a goal

I know a lot of people that train really hard for a race and as soon as it's done they stop working out and lose all their fitness gains. A goal is usually an aim to achieve something by a set time. Once you've achieved it, you're done! So you stop.

A system means you are always training, or working or whatever. As long as you can make it sustainable, you can keep going forever. It's a lot simpler in many ways than setting a different goal each year. And it means you don't stop.

I'm not a fan of deferring happiness. I want to be happy here and now. And goals are a big contributor to unhappiness. It's a problem if you will only let yourself be content once you lose a certain amount of weight or gain X amount of revenue.

With a system you don't have to defer happiness. You can recognise the small wins you are making by showing up every day and doing sales, or sticking to your workout routine.

A further problem I see with goals is this - after you reach a goal, you feel empty and then have to set another one to beat that! I don't want to constantly be doing that and not being happy with myself. Lots of people seem to think they'll be happy if they just get that promotion, or earn six figures or have a six-pack. But you can be happy with yourself now.

Does having no goals make me less ambitious?

I really don't think so. I think it's just more realistic to work on creating a regular system of work each day. Plus, I'm not tying my self-worth to some random number. I would still like to earn a lot of money - I just think this is a smarter way to get there.

I feel a lot happier without the pressure of having goals. A system gives me a lot more structure. And I know that as long as I'm following the system, I'll improve at whatever it is I'm doing.

p.s If you enjoyed this, check out my info products on Gumroad

I've decided to make a remote work product where I show permanently remote jobs. I'm still working on No CS Degree . And don't worry, this won't be another samey copycat 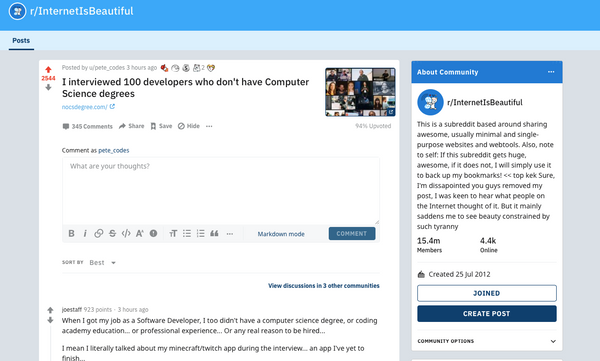 So on a spur of the moment I posted to the InternetIsBeautiful sub-reddit today. Another indie hacker had told me it was a great place to post as they actively