In 24 hours I've made $400 in pre-orders for my Monetize Your Newsletter course and my upcoming revenue reports on how companies actually make money and how you can too. I've found this to be a great way to validate my ideas rather than building first. I'll go through the advantages of this approach!

My normal approach of building first

Ok, sometimes it works! But let's be honest, most products fail.

My new approach of validating first 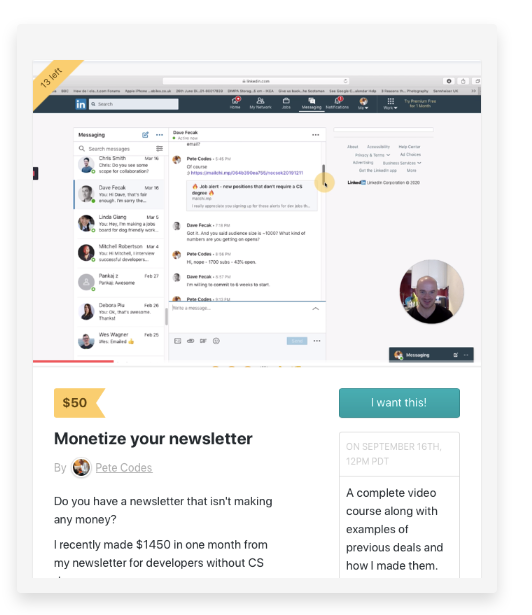 The difference approach between building first vs validating first  👇

Don't rush out and buy a domain

I'm really bad for doing this - I get a bolt of inspiration, buy a domain and then add it to my long list of project ideas in my Trello board. It's really a huge waste of money. I don't think your name is going to make or break your product.

There are also plenty of companies making stacks of cash that don't have .coms.

You can always choose another name.

Scott's Cheap Flights makes millions now. When Scott started it the sign up page was a sub page - it was something really unintuitive like scottkeyes .com/cheapflightdeals . It wasn't it's own domain that people could easily tell their friends. But it still turned into a million dollar product.

I think if your whole value is having a certain name that's not a recipe for success.

Get people to take their credit card out

I'm reading The Mom Test right now and it's a really great book. It explains why asking people if they will buy is not a sound business approach.

Of course if you ask someone "will you buy this?" they are likely to feel pressure to say they will. I've had countless people say they would buy a job advert on my job board. Most that have said that haven't followed through. So next time that happens, I'm going to send them a payment link 🤑

The power of the pre-order

Getting people to make a pre-order forces them to punch in their credit card information and separates the people being nice to you and the people who will actually buy. The great thing with Gumroad pre-orders is that the customer isn't charged until you release the product. So you could always cancel the product if not enough people decided to buy. Obviously, you would need to explain this to people.

In my case, I have two products up for pre-order now. My Monetize Your Newsletter course is already almost finished so I felt fine putting up a pre-order link. This was my old approach of building first. At least with pre-orders I can now test how much demand there is and decide on pricing before the official launch. The course is selling well at $50 so that's encouraging.

My second product in one in which I analyse how companies make revenue. I've already written one such report on Key Values making $300k a year. I really enjoyed writing this and it means I can show people an example of what they get before buying. But I can also test demand first. I don't even have cover art and I already sold out the first 10 copies at $10 each. 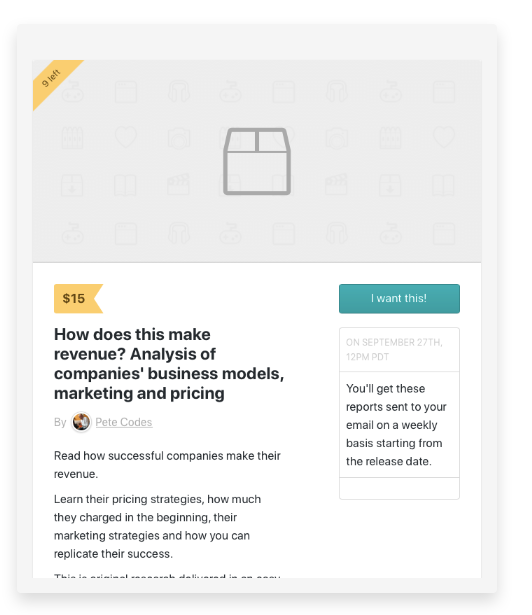 Don't overcommit until an idea is validated

10 people bought 10 editions of revenue reports priced at $10 in the first day. That's $100 so that's pretty good. Bear in mind I haven't even launched it properly yet and there is no cover art. So maybe when I launch I could get this up to $500 or $1000. I haven't made it a recurring subscription - it's a one off payment. This means I can test demand for it and I don't have to over commit to something.

In contrast, what I would normally does is overcommit and spend months making something that people don't want. And then I wouldn't want to quit so I'd probably keep working on it not to lose face. It's much better to find out if your idea sucks BEFORE hand instead of after you have worked on it for months.

In September I am releasing my Monetize Your Newsletter course - I will show you how to find sponsors, what and when to charge, sales techniques and much more! You can check out a list of contents on Gumroad.

I'm also writing reports on how companies make revenue and how you can replicate their success. This is also available for pre-order on Gumroad. 😀